Iowa’s Governor Kim Reynolds has released a school privatization plan that would cut funding for public schools and redirect taxpayer money to schools that aren’t required to provide equal access to all students. Her privatization proposal undermines the ability of students in lower-income and communities of color the freedom to choose fully funded local public schools. 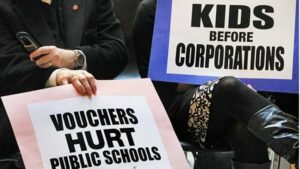 As the NAACP said previously, “While high-quality, accountable, and accessible charters can contribute to educational opportunity, by themselves, even the best charters are not a substitute for more stable, adequate and equitable investments in public education,” wrote members of the NAACP’s task force on quality education in a report.”

The reality is that privatization is just an easy way for wealthy families to get their inequitable access to private schools subsidized by taxpayers.

Dr. Martin Luther King Jr. said in his ‘Letter from a Birmingham Jail’, “We know through painful experience that freedom is never voluntarily given by the oppressor, it must be demanded by the oppressed.”

It used to be that every student in the United States had the freedom to attend a local, publicly funded school. Those schools were inequitably funded, and neglected for far too long.

The solution is NOT to take funds away and force busing and movement of funds to wealthy private schools. The solution is to finally fund our public schools in ways that improve outcomes for everyone, support our teachers, and give every student the freedom to learn in a quality public school.